I read about a distributed bass array (DBA) a couple of years ago, and the concept was intriguing and made a lot of sense.  Bass in a listening room is affected by standing waves/room modes.  The distributed bass array alleviates this by strategically placing as many as four (!) subwoofers in a room to even out the bass response.  The volume of each subwoofer is set to a very low level, so it is not a matter of overpowering a room with too much bass. 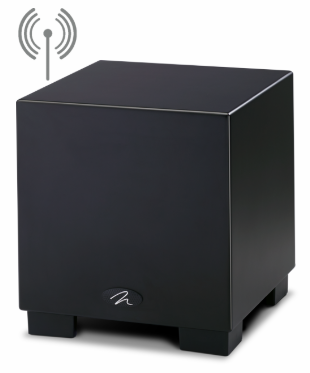 There is at least one complete DBA system available, comprised of a single 1,000 watt amplifier and four subwoofer modules.  Given my room layout, this would be somewhat inconvenient, primarily for all the wiring it would require.

A Martin Logan Dynamo 700W sub came up on the local Craigslist dirt cheap and in excellent condition, so it followed me home. These subs are not very big at all–with the feet or spikes on, they are a hair less than the cubed size of an album jacket. Yet they can dip down into the 25Hz range. With class D amps on board, they offer up to 300w continuous and 900w peak. It can be changed from downward firing to front firing.

My Vandersteen 2ce pair dips down to about 28Hz for a -3dB point, thanks to the “bass coupler” which is a 10″ driver at the bottom rear of the speaker that pretty much acts as its own subwoofer. But that nasty bass suckout in my room bothered me. The DBA has been at the back of my mind as a means to minimize that suckout.

The 700W is wireless (the “W” in the model), and comes with the transmitter that hooks to a preamp output. I used Audioquest RCA cable splitters at the preamp, and ran the spare interconnects to the wireless transmitter. It paired up easily, and it works. (As an aside, my ML soundbar can also act as a transmitter for the 700W and 1000W subwoofers.)

I’ve tried the 700W in the corner by my desk in the back of the room, but found it a little too boomy. I moved it in front of the CD rack, by the opening to the kitchen at the rear of the room, and it’s a bit better. The key is to set the frequency low enough to cover the missing bass notes, and the volume low enough so the sub isn’t noticed. Setting the phase (0°, 90°, 180°) is another option.

OK, so far with dialing it in roughly, and having only one sub, the distributed bass array concept mostly works. I can sit in my preferred spot and the bass is now much more even, and I can hear just about all bass notes now. A clear improvement.

Here’s where it gets tricky. A DBA calls for as many as four subwoofers. And placement is somewhat critical, in that I would need to find the four spots in the room, along the walls, where the bass sounds the most even. (The fourth sub is run 180° out of phase.)

For the time being, I would live with the Vandersteens up front, and two rear subwoofers. But there is still a catch I hinted at above. I can still localize the bass in the rear, very slightly, even when I have the volume as low as I can logically set it. I believe this is partly due to time alignment. The bass from that rear sub is maybe a couple of feet closer to the listening position. Adding another 700W back near the desk is the plan, which should even it out just a little more–the bass feels slightly weighted towards one side of the room.

But what can I do with the time alignment? I am looking at a MiniDSP box with the right software plugin, where I could program in the distances for the rear subwoofers so they are delayed enough to match the perceived distance as the front speakers. In effect, pushing the virtual dimensions of the room so the subs appear to be further away.  I am not fond of digital processing (my amplification chain is, and shall remain, completely analog), but since this affects only the bass and is split out from the main signal path, it won’t make a difference in the grand scheme of things.

So for the time being, I will keep an eye out for another bargain 700W. They are plentiful.

Note that I still have the forlorn Sequel IIs to finish refurbishing (who has the time?), so if I put those into service, I will need to rethink the positioning since their response is not as low. Especially if I replaced the original woofers with the recommended aluminum woofers–the bass would not be nearly deep enough for me. Long term, I’m looking at the Martin Logan Summit, which has its own powered twin woofers that reach down as low as the 700W subwoofers, and that would be a natural for the two added rear subwoofers.

One subwoofer is only a small start on a DBA. Stay tuned as I work with this concept further.  Two subs may be enough if the front two speakers are responding well enough.  Or I may eventually need to take it up to four.  But my single 700W is more like a proof-of-concept trial and I can report that the basic premise is sound (no pun intended).